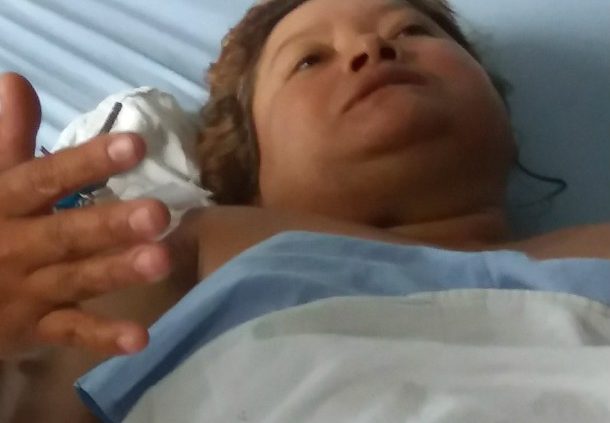 Today I got to hold L’s hand and tell her that people all over the world, people she will never meet, care enough about her to pay for her surgery and pray for her recovery. Although she can barely move, she was able to nod her head and give my hand a good squeeze. In the midst of the tragedy and suffering of her situation, your response has been astounding. We are so grateful for your overwhelming kindness.

After Saturday’s attack, L was taken to one of Guatemala City’s two major public hospitals. I’ve said it before, but it bears repeating: this place is a vision of the most hellish suffering. It’s filthy, overcrowded, and reeking with despair. This is the same hospital where, just a couple of years ago, our Jaqueline and her mama were waiting for an appointment when a grenade was thrown in through the main door, and they watched in horror as frightened strangers died around them. People would rather die than go to this hospital. For many, it’s often a better option.

Three times a week, visitors are allowed a scant ninety minutes of access. Men and women must form separate lines and enter by separate doors. The lines are long and miserable as everyone bakes in the afternoon sun. Visitors have travelled from all over the country for the chance to see their loved ones. Outpatients fill the entryway, exposing colostomy bags, weeping sores, and fresh wounds. They’re pleading for help and gore goes a long way to convince the waiting crowds that they should dip into their pockets. Screeching vendors, selling everything from toilet paper to adult diapers to soap and sponges, compete with the voices of the pleading poor. Bags and bodies are searched, and children turned away. There’s a fear that the young will bring disease to the sick.

Once inside, the divided sexes are thrown together in a chaotic search for their patient. The press of people is terrifying. Everyone is frightened. Everyone is intimidated. The only signs demand months of back pay owed to the doctors and nurses, or advise visitors and patients alike that they must not pay for any services provided. Garbage and blood compete for floor space. It’s a place of staggering misery.

We found our sweet friend. Three days after her assault, where she was raped and shot seven times, and two days post surgery where her arm was pieced together with temporary pins, – she had received no pain medication and no i.v. fluids. Her jaw, let me remind you, has been pulverized by a bullet. Her teeth are wired together to keep everything in place. Obviously she couldn’t speak, but her eyes and her desperate whimpers told us everything. She was in agony.

Zack went in search of a doctor. He was gone for a long time. No one, it turned out, had the authority to prescribe her anything for the pain. There’s only one doctor who can do that…and he was busy. So she lay there, helpless.

The family had been given a prescription for the surgical plate that she must have inserted to repair her ruined arm. The doctor had told them it would cost about a thousand dollars. He may as well have told them they needed a ladder to the moon. This hospital is filled with people whose only hope for help or healing is way beyond their grasp. Patient’s families beg in the hallways as their loved ones slip further towards death for the want of a few hundred dollars.

We told L’s family that we would try to get help. When we showed up today with the receipt for the surgical plate (which, it turns out, cost more than twice what we’d originally been told), L’s son burst into tears. You have done an amazing thing in paying for this for her. I know she’ll have a lot more expenses, but this is a huge part of her recovery process. I can’t overstate how grateful we are.

Yesterday, three days post surgery, she had still not received any pain medication. She still had no i.v. fluids. She was still hissing at the pain. Since visitors aren’t allowed in on a Wednesday, I spent the day trying to coach her family via phone messages. Frightened, uneducated, marginalized people are too overwhelmed to fight for themselves. They don’t know their rights, and they don’t know they’re allowed to insist. A friend joined me in the coaching effort, encouraging the family to fight for L. When they finally managed to speak to her doctor, he told them he had other patients to see and walked away.

L. came from La Linea. No, I can’t prove deliberate discrimination, but I’m pretty sure it is there.

Finally, last night, they caved and gave her a single dose of pain medication, and L. was able to sleep after so many days of suffering.

Zack and I spent the day buying the plate for L’s arm. Yes, the entire day. And this is another part of the process that makes it impossible for the poor to get the help they need. We had to make multiple, complicated phone calls, stand in endless lines, find enough cash to pay for the plate (because why would a medical equipment company take a credit card?), wait for an hour to pay for the plate in a bank, drive deposit slips and medical forms from one end of the city to another, park in sketchy places, and deliver piles of photocopied pages into the hands of bemused medical staff. I’m exhausted, and yet I had money, education, a telephone, Google maps, and a vehicle on my side. The poor have none of these things. No wonder the families of the sick so often pick them up and carry them back home to die. The alternative is just too complicated and beyond their reach.

So, thanks to many of you, we were able to prove to the hospital that L’s plate has been purchased. Now we wait for them to schedule her surgery. They do surgeries on Tuesdays and Thursdays. They can’t tell us if she’ll even make next week’s list.

Now we wait. L. has had one more dose of pain meds. That’s two doses since her first surgery. The other patients in L’s room have been moved, and a police officer has taken their place. I asked why she was there.

“Oh, we have to guard her twenty-four hours a day now,” said the nice lady, beaming.

“Yes. She’s in a lot of danger. She lived, and that wasn’t supposed to happen. We have to stay with her now. They are probably going to come for her.”

I’m really going to try not to write a novel every time I post an update. But , once again, I apologize for my lengthy rant.

Thank you for caring for the stranger beside you. I know that many of you are likely thinking you have done too little. But you have loved a woman who represents the most despised, the most rejected members of this society. This matters to her and to her friends. You have done a very good thing.

This is far from over.