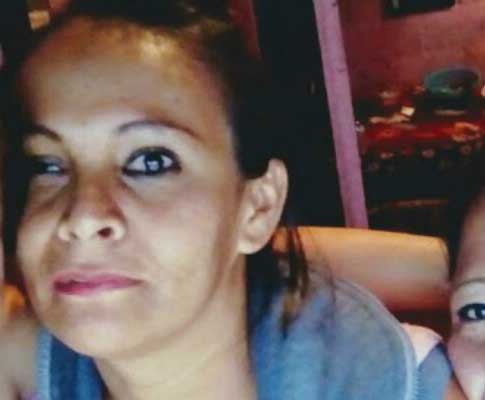 It was 4.30pm last Thursday – and I was happily strolling through the luxury of a bookstore in Calgary.

And even now, I can’t think about it without crying.

How is it, do you think, that it can be so easy to end a life; to blot out all of the laughter and joy and friendship with a single bullet?

Very easy, it turns out.

She was the loudest, most alive woman on La Linea.  Everyone knew her – she was impossible to ignore.  With her disfigured blind eye and broken, rotten teeth, she made her presence a dominating force wherever she went.  The first time my friend Lia met her, Sulay, in typical fashion, looked her up and down and announced, “You are very pretty!  BUT…I am the prettiest one here!”  They she howled her unforgettable laugh and threw her arms around me in a hug.

Yes, sweetheart, you were the prettiest.

Like all of the women on La Linea, Sulay, from Nicaragua, had had a horribly difficult life.  She never told me how she lost her sight in that eye, and I never asked.  But I wondered if a man had done that to her; if that was yet another mark of the abuse she had endured.

She would have turned 37 in October.  We were already planning to celebrate.  Not enough for her, the standard birthday cake we make for all the other girls.  Sulay had to be taken out for lunch.  Okay.  We can do that, love.  But now, of course, we can’t.

She had three little girls.  The oldest, only 12, worried her because she didn’t really care about studying.  Sulay was frantic that she would understand that education was the only way out of poverty and abuse.  She adored her girls and we’d often talk about the struggle to mother well.

“Sometimes she makes me so angry, Natalita.  I want to yell.  But yelling is bad for children, isn’t it?  It hurts them.  So I try to show her how much I love her.  I try to love her into changing her heart, but I’m afraid for her.  Afraid that she will rebel and lose everything.”

In reality she was afraid that her oldest would turn out just as she had done.  That she’d rebel, leave, and make every bad and destructive choice.  So she battled to convince her to live life well.

I know when someone dies, people always have gushingly lovely things to say about them.  It makes me wonder if the rotten people ever die.  Maybe nobody eulogizes them.  But Sulay truly was an extraordinary woman.  She was one of the first ladies of La Linea that we ever met, and while others took months, even years, to open their hearts to us, Sulay threw her arms open from the earliest days.  She would laugh, tell jokes, and celebrate the smallest things. 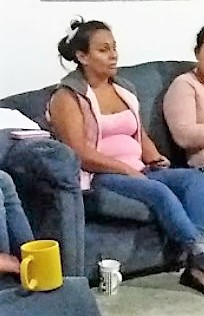 Sulay holding court in La Puerta! When she talked, we listened =)

Before we had La Puerta, Shawn and I would walk up and down the line, handing out coffee and snacks and chatting with the ladies.  It was hard work, but the hours and years we spent doing that have paid off with amazing relationships.  But, of all the friends we’ve made, Sulay was the only one who would call out to me while “servicing” a client!  Can you imagine?  No, you really can’t.

And we’d come back.  Of course we would.  Nobody could say no to Sulay.

During the last couple of months it was obvious that something was really bothering her.  When Lorena was attacked, it was Sulay who hurried to La Puerta to tell me what had happened.  She was devastated by the attack.

When Zack and I showed up at the public hospital to visit Lorena for the first time, Sulay waited for us at the entrance.  She was so heartbreakingly delighted to meet Zack.  She threw her arms around him, thrilled to be allowed to know one of our kids (to her it meant we trusted her).  He liked her.  She made him laugh with her hurried babble and her humour.  From that point on she’d brag to the other ladies that she’d met my boy.  “So tall and handsome,” she’d say.  “He looks just like Natalita.”  (He doesn’t!)

She was one of three ladies from the line who visited Lorena with us that day.  When she saw her broken friend she doubled up in pain and horror.  It was so much worse than she had imagined.  Once she calmed herself, Sulay stroked Lorena’s face, whispered words of comfort, and gently covered her broken, naked body with a thin sheet – determined to give her friend dignity.  She wanted to celebrate Lorena’s birthday – then only days away – and promised her a party and steak.  She meant it.

During these past months, when we were alone, she’d tell me that things were very bad.  She kept saying that she had to tell me something, but she never did.  I couldn’t force the words from her, but I encouraged her, every time I saw her, that she could tell me anything.  I knew she wanted to, but she was just too scared.

The last time I saw her she was laughing.  A team was visiting and working in La Puerta.  Our friend Scarleth, a former sex worker, was working with us, too.  On that last day, Scarleth shared the story of her life and her escape from prostitution.  Sulay sat right in front of her, leaning forward and drinking in every word.  As she left that day she was laughing and joking – as usual.  She put her arms around me and said, “Ah, Natalita,  I love you so much.  I feel like you’re my mother.  Will you just adopt me so that you can be my mama forever?”  Then she howled with laughter and told her friends what she’d said.  She found herself hilarious!

And that, for me at least, was the last time.

On the September 14, around 4pm in the afternoon, a man on a motorcycle pulled out a gun and shot her between the eyes.  It was likely over before she hit the ground.  One of our friends ran to La Puerta yelling for Shawn.  But there was nothing anyone could do.

I will regret forever that I wasn’t there.  I wish, more than anything, that I could have held her hand as she slipped out of this world.  But she lay there in the dirt, alone and broken, and that can never be undone.

That day was the beginning of an agonizing week.  She wasn’t the only woman shot that day.  Our friend Telma lies in hospital gravely ill.  Since then, there has been more violence.  But this is enough for now, right?

But I want to say this one thing.  I know that when you hear us say that we love the ladies of La Linea, that it likely sounds like platitudes.  Like it’s the kind of thing that people in our line of work are supposed to say.  But we mean it when we say we love them.  They matter.  They matter to God.  They matter to us.

Losing Sulay is one of the most painful things I’ve ever experienced.  She was my friend.  I looked forward to seeing her every time I showed up on La Linea.  She was unforgettably glorious  – a true delight.

We will miss her forever.